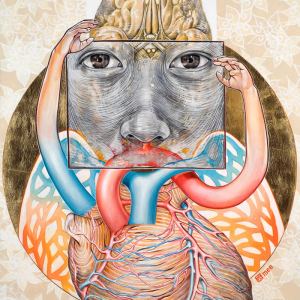 My new book Proving God is the result of a seven-year effort (including two years of attending seminary) to unify science and theology. My two main strategies are to show that love is the ultimate science and that Holy Scripture is a multidimensional scientific document.

The biblical story in Genesis of the relationship between Jacob and his twin brother Esau can serve as a micro-illustration of both of my strategies. Those who are familiar with this biblical story know that Jacob tricked his older brother out of his birthright (as firstborn) and inheritance of their father Isaac. Later in the narrative, Jacob returns to his brother Esau in the land of Canaan with all his belongings and begins to serve him as his lord.

According to scientist/theologian Emanuel Swedenborg, this turn of events between the twin brothers transcends mere historical data and represents heavy-duty psychological growth and the patterning principles behind mental development. Holy Scripture, because it is a unique deposit of God’s Infinite Wisdom, by necessity, must contain ever-deeper levels of meaning. On one level of exposition, Swedenborg claimed that the stories of the Bible contained the science of mind and its proper heaven-bound development according to the Lord God’s divine scheme and order.

Symbolically speaking, the two human cognitive functions of will (volition) and discernment (intellect) are like twin brothers. When human babies first come into the world they are pure volition and must glean knowledge from the world over time. Volition is desire and affection (derivatives of love). Therefore, in the human psyche love is firstborn.  However, as the mind learns new things the intellect becomes primary and gains the upper hand. This is why Jacob, who represents the human intellect, gains the upper hand on his older brother Esau.

As the intellect develops and accumulates more possessions (wives, handmaids, children and flocks) it realizes that everything must be returned for the sake of putting love and goodness back in the primary position. First we seek knowledge then we seek wisdom and that which ultimately promotes goodness of the heart. This is why Jacob eventually seeks out his older brother, symbolically representing the human intellect submitting itself before the human heart. Jacob’s organizing his family members and possessions into a particular order before submitting them to Esau represents the emergence of new cognitive structure according to their importance, that is, the arrangement of general and particular concepts within the disposition of the love represented by Esau.

Love is the ultimate science because it disposes all form into coherent and orderly structure according to utility and serviceability (whether mental or physical structure).

I have just scratched the surface of this multidimensional exegesis and left many, many details out. That God’s Holy Word contains such incredible depth and wisdom shows just how much darkness humankind lives in. In fact, Genesis begins on page one by describing this void and darkness! In other words, on a deeper level, the Bible reveals our own intimate story and changing relationship with the Lord God!

These deeper insights are now being made available to men and women who have a sincere desire to learn more.

EDWARD F. SYLVIA, M.T.S. Philosopher/Theologian Edward F. Sylvia attended the School of Visual Arts in New York and received his Master of Theological Studies at the Pacific School of Religion in Berkeley, CA and a Certificate of Swedenborgian Studies from the Swedenborgian House of Studies. He is a member of the Center for Theology and the Natural Sciences (C.T.N.S.) and the Swedenborg Scientific Association (S.S.A.). Award-winning author of "Sermon From the Compost Pile: Seven Steps Toward Creating An Inner Garden" and "Proving God," which fulfills a continuing vision that God’s fingerprints of love can be found everywhere in the manifest universe. His most recent book, "Swedenborg & Gurdjieff: The Missing Links" is an edgy collection of anti-intuitive essays for personal transformation that challenges and inspires. He has been a student of the ideas of both Emanuel Swedenborg and George I. Gurdjieff for over thirty years. Read more about TheGodGuy, his books and his ideas at http://www.staircasepress.com
View all posts by thegodguy →
This entry was posted in god, Inner growth, love, psychology, Reality, religion, spirituality, symbolism, unity and tagged Bible interpretation, bio-complexity, deeper meaning, Emanuel Swedenborg, Genesis, human intellect, mental growth, proving God. Bookmark the permalink.