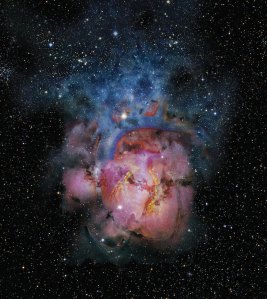 When one contemplates a bit he or she will see that the human mind has a unique  aptitude for exploring invisible realms. The mind has the unique capacity to see things that nature does not showcase. For instance, the invention of the wheel involved visualizing something not created by nature but then imposing this imaginative idea on materials found in nature.

Also, higher abstract mathematics is used by scientists to describe things that are neither observable nor testable. The higher dimensions of string or membrane theory are a good example of a scientific model that is embraced by many of the world’s the best scientists but cannot be taken as true science—according to its own definition.

So science, like religion, places its faith in unseen things!

Even more ironically, when science probes deeper into fundamental reality, phenomena becomes less physical and less under the constraints of time and space. Whether you ponder the essential Singularity from whence came the Big Bang or a quantum vacuum, the laws of physics seem to have their origins in an unseen and non-physical realm.

How do laws and forces act and behave in such a pre-natal universe or void? If religion is correct, this would be the same realm, beyond time and space, in which God eternally lives.

It would seem, therefore, that if the laws and forces that govern physics on the fundamental level exist in a pre-geometric state, they could be theological as well. Thanks to the voluminous works of scientist/theologian Emanuel Swedenborg, I have been able to find a rational nexus or causal link between God’s spiritual nature and the laws of physics—between the Infinite and the finite. This seven-year project has been put into a new book titled Proving God. The book is now available to the public. The future of science and religion is in their ultimate unification!

EDWARD F. SYLVIA, M.T.S. Philosopher/Theologian Edward F. Sylvia attended the School of Visual Arts in New York and received his Master of Theological Studies at the Pacific School of Religion in Berkeley, CA and a Certificate of Swedenborgian Studies from the Swedenborgian House of Studies. He is a member of the Center for Theology and the Natural Sciences (C.T.N.S.) and the Swedenborg Scientific Association (S.S.A.). Award-winning author of "Sermon From the Compost Pile: Seven Steps Toward Creating An Inner Garden" and "Proving God," which fulfills a continuing vision that God’s fingerprints of love can be found everywhere in the manifest universe. His most recent book, "Swedenborg & Gurdjieff: The Missing Links" is an edgy collection of anti-intuitive essays for personal transformation that challenges and inspires. He has been a student of the ideas of both Emanuel Swedenborg and George I. Gurdjieff for over thirty years. Read more about TheGodGuy, his books and his ideas at http://www.staircasepress.com
View all posts by thegodguy →
This entry was posted in god, metaphysics, Reality, religion, science, unity and tagged “Proving God”, Emanuel Swedenborg, human mind, Infinite, invisible realm, pregeometry, quantum vacuum, spacetime, string theory. Bookmark the permalink.

5 Responses to Believing in unseen things