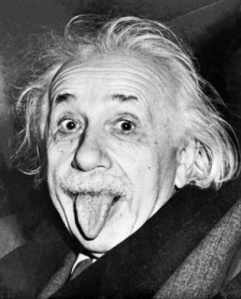 Einstein stunned the world with his theory of relativity, which showed that the faster one moved through space, the slower time proceeded.  When one moved faster, the geometry of space accommodated itself to this unique dynamical law. I remember a physics instructor of mine moving forward and placing his arm on the shoulder of a stationary student, then apologizing for making the student age faster (relative to his own motion in space).

Modern science is indeed amazing. But Emanuel Swedenborg took a similar principle of relativity well beyond merely physical spacetime considerations and applied it to the human psyche and spirit.

Swedenborg developed a comprehensive theory of human cognitive architecture that embraced a multi-level sandwiching of neural substrates. Each distinct and deeper substrate provided a matrix where higher operations of abstract thought occurred. (Modern neuroscience has only recently begun to look at multi-level theories.)

These deeper substrates and their matrices consist of different geometries that allow them to act under ever-increasing velocities or tempos. The difference is that mental motion moves through ideas and thoughts rather than past objects in space. The increase from one level of mind to a higher level of mind is so profound that the higher level could experience simultaneously what the lower level experiences successively. This means that their differences of operation always remain invariant.

So, in the same way that Einstein’s theory showed that the speed of light is constant— whether you are moving towards or away from a light source—Swedenborg shows that a higher level of cognition is always constant, relative to a lower level.

For instance, our visual observation of the world takes in data successively but the human imagination (inner sight) can take in all this same data relatively instantaneously and make new connections between ideas formed at different times. In Swedenborg’s cognitive theory, “seeing” is to the “imagination” as Einstein’s relativity theory compares physical motion to the speed of light!

There would be no abstract thought if the human mind could not harness its own form of relativity theory.

So rather than view cosmology from one constant (invariant or absolute) Swedenborg developed a model of reality, which consisted of multiple constants—ranging from the physical to the mental to the spiritual. Modern string theorists should take note.

This is the future of both science and theology!

EDWARD F. SYLVIA, M.T.S. Philosopher/Theologian Edward F. Sylvia attended the School of Visual Arts in New York and received his Master of Theological Studies at the Pacific School of Religion in Berkeley, CA and a Certificate of Swedenborgian Studies from the Swedenborgian House of Studies. He is a member of the Center for Theology and the Natural Sciences (C.T.N.S.) and the Swedenborg Scientific Association (S.S.A.). Award-winning author of "Sermon From the Compost Pile: Seven Steps Toward Creating An Inner Garden" and "Proving God," which fulfills a continuing vision that God’s fingerprints of love can be found everywhere in the manifest universe. His most recent book, "Swedenborg & Gurdjieff: The Missing Links" is an edgy collection of anti-intuitive essays for personal transformation that challenges and inspires. He has been a student of the ideas of both Emanuel Swedenborg and George I. Gurdjieff for over thirty years. Read more about TheGodGuy, his books and his ideas at http://www.staircasepress.com
View all posts by thegodguy →
This entry was posted in metaphysics, psychology, Reality, religion, science, unity and tagged constants and invariants, cosmology, Einstein, Emanuel Swedenborg, multi-level cognitive theory, neuroscience, relativity theory, speed of light. Bookmark the permalink.