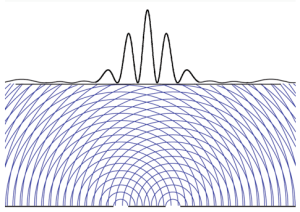 One of the biggest mysteries in physics is how the probability distributions in a quantum process collapse into a single outcome of measurement. How does one formal outcome emerge from all the possibilities? And what happens to all those other possibilities after a specific outcome manifests?

This challenge is known as the measurement problem in quantum theory. Without an answer, present day physicists do not know how the fuzzy quantum world interconnects with the classical world of reliable macroscopic measurement. There cannot be two kinds of physical worlds ruled by two kinds of laws. The unity of the universe is evidence that one set of laws rules.

One of the difficulties is that physicists are not in agreement as to whether the different probability trajectories in a quantum event are real or imaginary. Their activity (quantum foam) does not lead to anything that can be measured. Some scientists describe these “ghostlike” trajectories as the action of virtual particles.

I believe that scientist/theologian Emanuel Swedenborg provided the answer and I wrote about it in my award-winning book, Proving God.  Swedenborg, too, envisioned virtual-like particles existing in a realm prior to physical measurement. However, he claimed that these different (and indeterminate) virtual particles produced a formal outcome (“collapse”) from their cooperation and incessant drive towards harmony (self-organization through relational holism).

Swedenborg maintained that for new things to come into existence previous (a priori) things had to co-exist. In this way he was able to demonstrate how natural law emerged from spiritual law. The essence of Love (real spiritual force) is to unite, and all nature shows us a profoundly oriented, ordered and unified design.

If the term “harmony” seems unscientific and too romantic, please keep in mind that modern string theory suggests that the universe is built up on a grand musical model of differently vibrating strings.

EDWARD F. SYLVIA, M.T.S. Philosopher/Theologian Edward F. Sylvia attended the School of Visual Arts in New York and received his Master of Theological Studies at the Pacific School of Religion in Berkeley, CA and a Certificate of Swedenborgian Studies from the Swedenborgian House of Studies. He is a member of the Center for Theology and the Natural Sciences (C.T.N.S.) and the Swedenborg Scientific Association (S.S.A.). Award-winning author of "Sermon From the Compost Pile: Seven Steps Toward Creating An Inner Garden" and "Proving God," which fulfills a continuing vision that God’s fingerprints of love can be found everywhere in the manifest universe. His most recent book, "Swedenborg & Gurdjieff: The Missing Links" is an edgy collection of anti-intuitive essays for personal transformation that challenges and inspires. He has been a student of the ideas of both Emanuel Swedenborg and George I. Gurdjieff for over thirty years. Read more about TheGodGuy, his books and his ideas at http://www.staircasepress.com
View all posts by thegodguy →
This entry was posted in god, love, Reality, religion, science, spirituality, unity and tagged collapse of wave function, Emanuel Swedenborg, harmony, love, measurement problem, probability distribution, quantum theory, relational holism, string theory, virtual particles. Bookmark the permalink.