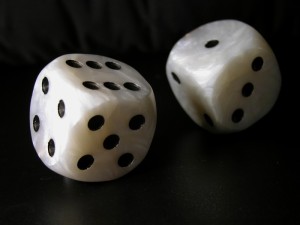 Einstein once said, “God doesn’t play with dice.” However, Emanuel Swedenborg’s theology would challenge this assumption.

God gambled on Love when the universe was created.

According to Swedenborg, because God is Infinite Love, a physical universe had to be created so that the Divine could direct that love towards a real subject. True Love requires that one does not love oneself but something other than oneself. The creation of the universe provided such a possibility for God.

However, Love is not complete or full unless it is returned or reciprocated. This caused God to not only create a subject to love but a living object or being who could love God back. This is why God had to not only direct the process of involution but also the eventual evolution of a being with the unique psychical capacity to both recognize the existence of the Divine Creator and worship the Creator from love.

The caveat is that Love has to be given through freedom. Without such a choice humankind would be deprived of expressing the heart’s desire. This was the gamble God took in the creation and evolution of the human race.

At first, the human race believed that all life, wisdom and love came from God. Humans were originally able to confirm this great truth by having the capacity to see into heaven itself and converse with angels. This original state was the “paradise” in which humans enjoyed spiritual love and loved God in return. But over time, the human race wanted to exercise their freedom of love and do things their own way. They wanted a stronger feeling of selfhood (called Proprium by Swedenborg). This presented a dilemma for God.

God had to preserve human free will, yet this would mean allowing humans to descend into the fantasy and illusion that life and wisdom was the property of these finite and created beings.

God knew that humankind could only be saved through freedom. So, to preserve this condition, God allowed humans to dabble in self-illusion. (This is the allegorical meaning behind the biblical story of God putting Adam “to sleep” and creating Eve from his “rib bone.”)

The resulting trajectory of the human heart and intellect was disastrous. The human will became completely ruined by human self-love and self-importance. Since life came from God and humans had become inclined to totally reject this reality, they cut themselves off from the source of life itself and many of them gradually went extinct.

To salvage the human species, God was then forced to modify the brains of those not yet extinct. Over tens of thousands of years, the human brain developed its frontal lobes whereby people could raise their intellect and learn things that could challenge their hearts and hopefully rise above their bio-selves.

This ability of humans to divide their minds between thought and feelings helped at first. But again, and over time, humans began to manipulate this division of mind to deceive others and hide their true intentions. From their separated intellectual capacity they could learn to say the right thing and outwardly act in ways that avoided suspicion.

According to Swedenborg, we learn this deception in childhood, that is, how to lie to adults. Eventually, through habit, humans learn to lie and deceive themselves. This deception or outer mask of one’s worldly personality is gradually mistaken as our true consciousness. Unfortunately, this fabricated consciousness intercepts any valuable information about spiritual transformation from reaching the human heart (will), and merely uses it for self gain in the terrestrial world.

As people died and entered the spiritual realm without addressing the true issues of the human heart, evil was never really addressed or resisted. This condition caused hellish realms to appear in the spiritual world. Even worse, the hells were expanding faster than heaven and even threatening angelic harmony and the minds of humans still on earth.

Under such an imbalance, human free will and the possibility of choosing good over bad was greatly diminished.

God now had to put things back into balance and proper order. This is why God came into the world and took on a human body. This gave those in hell the physical and finite ability to challenge an otherwise Infinite Being. During the Lord’s life on earth, He actually took on every possible temptation that the hells could throw at Him. With each victory over these influences, the Lord put all those in hell in their proper place and restored a cosmic balance of spiritual influences to preserve human free will and its equilibrium.

Unfortunately, this action of restoring equilibrium in the human heart doesn’t save anyone—it only keeps the doors open to salvation. That is why Scripture tells us that the Lord will return to finish the job. This is where Swedenborg’s theology shows itself as superior to all others—if only one can believe it!

A hint: Nowhere in Holy Scripture is it mentioned that humans ever came out of their state of spiritual sleep or illusion. That is why there are numerous references and warnings in both the Old and New Testaments to “awaken” and to “sleep not.”

The Lord’s return involves His breaking through this sleepy state of mental obscurity (coming with the clouds) and our need to address the issues remaining in our un-regenerative hearts—which have been untouched by our focusing just on accumulating knowledge in our intellects. Out of self-love and the wish to maintain the status quo of our fabricated and habitual lives, we will resist any effort by God to “rock the boat” and point out our personal flaws. This resistance is symbolized in Revelation by the armies of hell that fight the Lord.

What an appropriate challenge and profound metaphor to the many false beliefs and illusions that we still cling to then the battle of Armageddon and the earthquakes shaking up our inner world! If the Lord is victorious in waging this battle in our hearts and minds, He will indeed succeed in making all things new.

The next great religion on earth will possess this unique theological knowledge! We each play a part in how God’s dice will land!

EDWARD F. SYLVIA, M.T.S. Philosopher/Theologian Edward F. Sylvia attended the School of Visual Arts in New York and received his Master of Theological Studies at the Pacific School of Religion in Berkeley, CA and a Certificate of Swedenborgian Studies from the Swedenborgian House of Studies. He is a member of the Center for Theology and the Natural Sciences (C.T.N.S.) and the Swedenborg Scientific Association (S.S.A.). Award-winning author of "Sermon From the Compost Pile: Seven Steps Toward Creating An Inner Garden" and "Proving God," which fulfills a continuing vision that God’s fingerprints of love can be found everywhere in the manifest universe. His most recent book, "Swedenborg & Gurdjieff: The Missing Links" is an edgy collection of anti-intuitive essays for personal transformation that challenges and inspires. He has been a student of the ideas of both Emanuel Swedenborg and George I. Gurdjieff for over thirty years. Read more about TheGodGuy, his books and his ideas at http://www.staircasepress.com
View all posts by thegodguy →
This entry was posted in god, Inner growth, love, Reality, religion, spirituality and tagged Armageddon, Emanuel Swedenborg, end times, new theology, Revelation, salvation, spiritual history, the Lord’s Advent. Bookmark the permalink.