Jesus threatens to lose a sandal up a church minister’s butt!

Jesus began to make his descent back to earth as He had so famously promised some two thousand years ago. He had warned people back then that His Second Coming and return to the planet earth would be like a “thief coming in the night.”

However, rather than wait for darkness, the Lord decided to show up in broad daylight in disguise during a typical Sunday church service. Jesus sat down in one of the pews and secretly started to observe the spiritual actions and qualities of the worshippers.

He noticed that they were all quite helpful, courteous and caring towards each other. But something seemed askew.  They were all comforting each other with words like God loved them and was watching their back.  To the Lord’s surprise, this positive reinforcement caused people to keep their arms at their sides and embrace passivity for worship.  Jesus began to become concerned because the whole congregation seemed to be in a sleepy “trance” and their robotic observance of the rituals hopelessly entrapped them in a spell of dubious assumptions. The result of this orchestrated copycat behavior was that even the worshippers’ most noble manifestations of kindness were reduced to tinny, superfluous and programmed results.

The minister at the church gave an inspiring sermon on neighborly love which seemed to warm everyone’s hearts. Jesus thought that these comforting words, although technically true, were missing the most important point about the actual and personally most challenging process of spiritual rebirth. The congregation needed to be jarred out of its spell of passivity, which consisted mostly of hugging, warm smiles and affirming false images of each other in the name of spiritual love. This misdirected form of faith and hope had to stop.

Angry, Jesus rose up from His seat and shouted, “You are all a bunch of ninnies and wimps. Wake up!”

The congregation was stunned by the obnoxious outcry of the stranger.

Jesus continued to push everyone out of their comfort zones, saying, “Instead of calming each other, you should all be testing each other and helping your friends to bravely confront their inner flaws. Instead, you thwart this sacred process by sugar coating all your religiosity with puppetry, angelic pantomime and other forms of habitual associative response. Spiritual growth is about personal change—not protecting everyone’s measly ass!”

The minister came over to the ranting stranger to calm him down.

Jesus brushed the minister aside and said, “ Out of my way, ‘Mr. Feelgood’. Didn’t the Lord teach you all about cleaning out the inside of your cup and being attentive to the log in your own eye? Do you think this was simply a message for a few misguided individuals? Hell, no! You each have to address your hidden dirt, otherwise you proclaim goodness for yourself! Goodness belongs to the Lord!”

“Please sit down, this is God’s house,” said the minister. “This is a place where all people can feel safe.”

“Safe? Where can one feel safe if the danger lies within oneself?” Jesus grabbed the minister’s shoulders, shook him up a bit, then, began slapping him back and forth across the face, saying, “When you stop confronting yourself, your spiritual growth stops. You are worse than the money exchangers at the temple when you take people’s money and offer them a false sense of security and comforting words instead of addressing their true inner predicament and cosmic responsibility.”

Jesus then grabbed the minister by the scruff of his neck, dragged him to the huge wooden door at the front of the church and kicked him out. “Next time I will lose my sandal up your behind!” said the disgusted Deity.

From then on, the congregation (and its minister) began supporting each other in making renewed efforts at self-vigilance and the uncomfortable spiritual purging of their unflattering character traits. The congregation suddenly broke free of their inner inertia and began making new spiritual discoveries and opening up new possibilities.

The church began to live again!

Satisfied by this turn of events, the Lord smiled and began the process of bringing the Holy City, The New Jerusalem, down from heaven towards this very spot on earth. 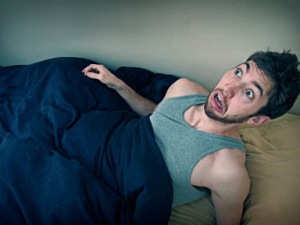 Suddenly Fred Murphy woke up in a sweat.“Boy, that was a weird dream!”

EDWARD F. SYLVIA, M.T.S. Philosopher/Theologian Edward F. Sylvia attended the School of Visual Arts in New York and received his Master of Theological Studies at the Pacific School of Religion in Berkeley, CA and a Certificate of Swedenborgian Studies from the Swedenborgian House of Studies. He is a member of the Center for Theology and the Natural Sciences (C.T.N.S.) and the Swedenborg Scientific Association (S.S.A.). Award-winning author of "Sermon From the Compost Pile: Seven Steps Toward Creating An Inner Garden" and "Proving God," which fulfills a continuing vision that God’s fingerprints of love can be found everywhere in the manifest universe. His most recent book, "Swedenborg & Gurdjieff: The Missing Links" is an edgy collection of anti-intuitive essays for personal transformation that challenges and inspires. He has been a student of the ideas of both Emanuel Swedenborg and George I. Gurdjieff for over thirty years. Read more about TheGodGuy, his books and his ideas at http://www.staircasepress.com
View all posts by thegodguy →
This entry was posted in god, Inner growth, love, psychology, religion, spirituality, unity and tagged Jesus, rebirth, second coming, self-confrontation, spiritual growth, spiritual inertia, trance, worship. Bookmark the permalink.

2 Responses to Jesus threatens to lose a sandal up a church minister’s butt!