Is it okay for witches to eat little children? 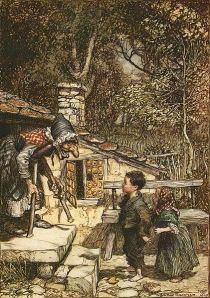 In Fairy Tales, that is exactly what witches are designated to do!

Unfortunately, such stories have been deemed “savage” towards children by some post-modern thinkers who are strident at pointing out any kind of injustice they think they see with their physical eyeballs.

The biggest problem with political correctness is that it ignores the higher levels of truth contained in symbolic storytelling. This ancient form of storytelling conveys perennial wisdom enfolded within fantastic scenarios. These fantastic stories were designed to challenge the human habitual mind in the hopes that it would stretch and elevate the imagination to perceive new levels of consciousness and truth.

Political correctness only embraces one level—the lowest terrestrial level of life on earth. Higher realities (and communications) are ignored, and worse—not even suspected.

Witches and the evils they represent can only be sustained by devouring any form of innocence that comes their way. That is what keeps evil alive—the destruction of innocence.

The oldest of our Fairy Tales were written to present us with a creative panorama of our innermost world—to make our hidden psycho-spiritual reality more observable to our normal consciousness. Witches eating children is something that happens deep inside everyone’s hearts and minds every time our ego destroys goodness. (That is the kind of message that is relevant even to those who champion terrestrial fairness, political correctness and justice.)

Every time we each do something that destroys innocence, our inner witch comes alive and snacks on the inner children that were destined to grow up and mature within our hearts and minds!

According to scientist/theologian Emanuel Swedenborg, Jesus spoke totally in this ancient form of symbolic communication (called correspondences). Not knowing this has made many modern thinkers conclude that God’s Holy Word is not inerrant nor contains any real authority.

I find it embarrassing that many of the self-proclaimed heroes of modern thought actually have horribly atrophied minds when it comes to recognizing real enlightenment and perennial wisdom. The future of humankind will depend on elevated minds.

EDWARD F. SYLVIA, M.T.S. Philosopher/Theologian Edward F. Sylvia attended the School of Visual Arts in New York and received his Master of Theological Studies at the Pacific School of Religion in Berkeley, CA and a Certificate of Swedenborgian Studies from the Swedenborgian House of Studies. He is a member of the Center for Theology and the Natural Sciences (C.T.N.S.) and the Swedenborg Scientific Association (S.S.A.). Award-winning author of "Sermon From the Compost Pile: Seven Steps Toward Creating An Inner Garden" and "Proving God," which fulfills a continuing vision that God’s fingerprints of love can be found everywhere in the manifest universe. His most recent book, "Swedenborg & Gurdjieff: The Missing Links" is an edgy collection of anti-intuitive essays for personal transformation that challenges and inspires. He has been a student of the ideas of both Emanuel Swedenborg and George I. Gurdjieff for over thirty years. Read more about TheGodGuy, his books and his ideas at http://www.staircasepress.com
View all posts by thegodguy →
This entry was posted in god, psychology, Reality, religion, spirituality, symbolism, unity and tagged children, correspondences, Emanuel Swedenborg, fairy tales, higher mind, innocence, modernity, political correctness, wisdom, witches. Bookmark the permalink.

2 Responses to Is it okay for witches to eat little children?